What People Have Said And Subsequently Denied That They Have Said About
‘The Status Report’:

'Local poetry which actually made us laugh for the right reasons...
The Status Report is a collection of satirical poetry packed with parodies on everyday office life.’
Maidenhead Advertiser

Versed Class!
‘Some of these poems are silly. Some are serious. I found the silly ones funny and the serious ones made me realise how much I loathe the self-important, conniving careerists I know.
I can’t say what these poems resemble because they are not like anything I’ve ever read before. Bite-sized chunks of straight or black humour, perhaps.  You could finish these poems in a single afternoon, but it’s the sort of book you’ll keep coming back to.’
Tim Weekes, Amazon review

If you think poetry is just a load of pretentious bollocks, then this book may change your mind.
The Positive Review

If you think poetry is just a load of pretentious bollocks, then this book will confirm your suspicions.
Cynics Weekly

Some of these poems are not funny.
Malcolm, Surrey

Most poetry websites have poems by dead people. Alex Frankel is a poet who isn't dead yet, which is nice. If you want to get some understanding of modern poetry, then this or other poetry websites may not be the perfect place to start.
Mr O Ptimizer

A short poem by an anonymous poetry fan:
My conclusion from an afternoon
Spent browsing poetry websites
Is that poets are a bunch of
(usually dead) gob shites


A Prayer For Optimization

Oh, search engines,
Who art on the Internet,
Index my pages,
Which took me bloody ages,
To optimize, longer than it took
To write the satirical poems,
Not to mention the funny poems
Or the weird poems.
Or even the black humour ones.
Crawl my keywords
And mark them highly relevant,
Tag my poems ‘silly’
For this is what they are,
Simple verse designed
To make you go ‘Ha, Ha’

This website wasn’t born
To make my daily bread.
For that I’d write erotica instead.
So please don’t be suspicious
Of my intent, liberate my content
And follow hyperlinks from us
And from those who have
Reciprocally linked to us.

Consign us not to web anonymity
Nor force us to the marketeers
Who charge a fee.

Rank these silly, funny poems
Without bias or malevolance,
For thine is the keyword,
The browser and the relevance.
Amen.

Secrets of the Poet’s Craft:

Unusually for modern poetry, the poems on these pages have been written in the English language using nouns, verbs, adverbs, conjunctions and various other complex grammatical devices.

Most of the poems were constructed from a sitting position (bed or sofa), but the pictures were drawn in upright stance at an upstairs window ledge, while humming a tune. 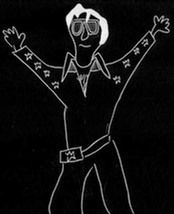 (and justification for long
periods of idleness):

Never write unless you feel like it.
Get a proper job in your spare time.

Here is a detailed breakdown of the poet’s illustrious literary career:

1932: But one of his relatives is born in this year. Surely a sign.

1977: The poet does not perform at the Queen’s Silver Jubilee.

1982: Writes a poem at school about a fish and receives eight out of ten.

1996: The poet suffers a bout of diarrhoea and this mysteriously triggers his writing hand into motion. He writes Bowel Trouble, Bottom and a few slightly embarrassing self-analytical, angsty poems and some really dodgy ones about the weather because he has learnt at school that the purpose of poetry is to wax lyrically and unintelligibly about depression, the weather and trees.

1999: Buys a graphics tablet and draws some weird pictures to go with some of the weird poems. Just to pass the time really.

2000: Starts including pupportedly funny poems in office status reports. Colleagues are at a loss for words (unlike the poet), but no disciplinary action is taken.

2003: Stuck for ideas on what to buy family and friends for Christmas and birthday presents, it occurs to the poet that he has written just about enough lines to put together a slim volume of poetry.

2004: Gives the book to family and friends for Christmas and birthday.

2005: Gives signed copies of the book to family and friends for Christmas and birthday.

2006: While staying at the houses of family and friends, spirits away their copies of said poetry book, thus taking care of the present dilemma for another year.

2007: Having reached the pinnacle of poetic ambition, decides to stop writing poetry.

2014: The poet decides to write some poetry and also draw some pictures, even though he can’t draw. He finds that these days he enjoys drawing bad pictures more than writing the poems.

2019: Inspired by not being dead yet, writes a few more poems, starts to make grand (literary) plans for the future, then promptly loses interest.